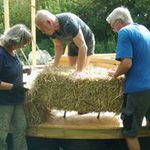 We started in January 2017. First we dug out a circle to create flat ground for the circle of tyres, packed with sharp gravel, to sit as the foundation.  Then in February/March we cut and sharpened all the stakes we would need to 'sew' the strawbales together and to locate the bales onto the base.

Next in April and May we built two circular  'box beams' to sit on the tyres and then eventually on top of the bales, filled with insulation, that would take the first round of bales and then the roof. These were made from an eco grade OSB board called 'Smartply' which doesn't contain any nasties and just normal structural 2x4inch timber. In hindsight I would not have used the recycled plastic bottle insulation in the box beams but it was very cheap and readily available at the time. July was spent hanging the joists from this ring beam to a central tyre pillar. The layout of your joists determines what pattern your flooring  will end up - a snail shell like octagonal spiral in this case!

The bales were sourced from a local merchant who could supply very dry, high density bales. You need to ask for the highest density baled ones that are especially needed for building. We ordered about 120, if I remember right, and they need to be kept very dry off the floor (we lay pallets on the grass first and covered with two gazebos). These were delivered in August 2017 and we started building that month.

Once the bales were all built up we placed another boxbeam on top and the whole sandwich was compressed down using lorry ratchet ties, which we tightened every day for a week. The sides need to be beaten into alignment each day to stop a barrel shape appearing. Brute force does work.

The roof uses a central compression ring that takes the central weight of the beams and the 3 tonnes of green roof soil, which was a lightweight special roof substrate containing a lot of pummice. The soil was bucketed out of ring over the winter of 2017/2018, all 3 tonnes carried up scaffolding (on the inside)  and chucked out the top! It was then sown with sedum and alpine seed and the central light dome secured. I designed the metal compression ring to be the exact dimensions of a commercial double skinned roof light dome so as to be able to buy this and attach it easily. The compression ring,  also serving as a rooflight then,  was made to my spec by a local metal fabricators.

The roof is doubly secured by  a 1cm thick stainless steel wire (used for yachts) fed through each roof joist and held under tension. This stops the outwards pressure from pushing out the walls.

We had to rig protection as we laid the floor in the winter of 2017/18.We used reclaimed flooring which took a great deal of processing, removing nails etc and sanding down but looked great eventually waxed. Cutting each board to individual size was a work of love but I was so pleased by the result.

The outside was lime rendered  in Sep/October t 2017 with some help by the local PDC group and the inside was clay plastered starting in April 2018 using clay from the foundation digging and again helped out by people on a subsequent PDC and a cob plastering workshop I held here. I made the snail relief out of cob to give a centrepiece and to make reference to snail being my totem, slow and small solutions is my motto!

The double glazed windows and special round door step were made by a local carpenter and the windows and door frame were fitted by us in May 2018. They would have been in earlier except the carpenter had a fire in his workshop which burnt all our frames and reclaimed door to ash so we had to wait for replacement.

The decorating inside is all clay paint which is crucial to allow everything to breathe and was finished off over the winter of 2018/19 once the cob plaster had dried. From spring 2019 we started using it as an indoor workshop space and meditation studio.

The living roof has really started to come into its own now after the drought in 2018, but it seems to be setting its own seed and spreading out in clumps.

In November 2019 we fitted a small wood burning stove and chimney in the roundhouse so it could be used during the winter months. I can now offer autumn and winter workshops with some cosy indoor space to retreat to.